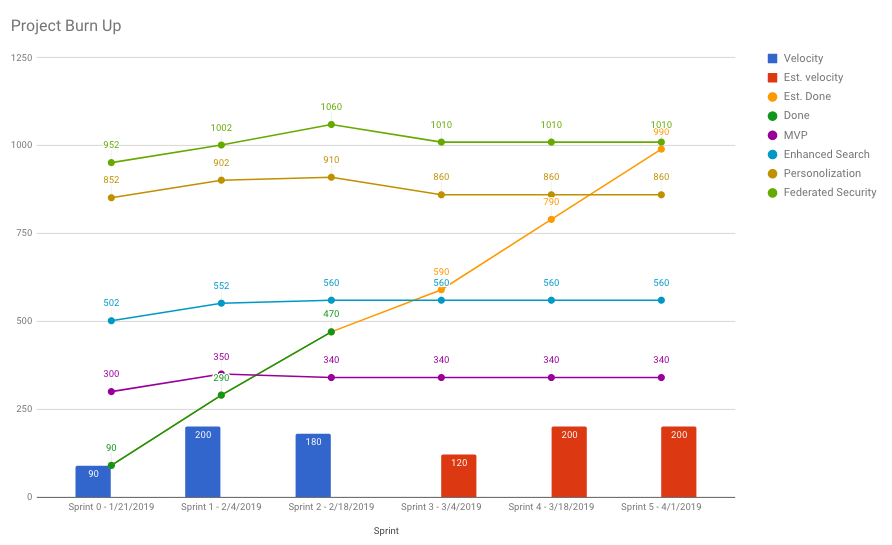 Velocity is an excellent planning tool for longer projects and stable teams that are not very small. It allows you to ignore details like vacation and bad estimates. The law of averages smooths out the bumps allowing you to make a reasonable directional estimate of what can be achieved by a given date.

For smaller teams on short projects of four to six sprints the vanilla velocity does not work as well. If a developer goes on a two week vacation both the sprint capacity and release projection can be significantly off. In a recent case we needed a larger team to complete the project but the fifth member was not available until the third sprint. You can manually adjust for these situations but I prefer to automate when it saves time.

The workbook described below will give you the expected velocity and a graph with a projection of the completed scope using minimal data entry. Remember the output is as good as the input. Estimates are not predictions. Don’t over-interpret the numbers. I often show the graph at sprint reviews without numbers as a directional indicator.

The workbook consists of 4 (sets of) sheets:

Please email me at [email protected] for a copy of the template.

The sprints sheet provides an overview of the sprints including capacity, accepted velocity, actual velocity and more. Most of the data is calculated. You only need to update the yellow cells.

Only edit the yellow cells.

The graph sheet shows current, historic, and projected delivery in one graph. The graph may initially look intimidating but once the various components are clear it provides a quick overview of the project.

The graph shows the velocity in story points of previous sprints in blue. Estimated future sprint velocity is shown in red.

The yellow Est. Done line shows the projected accumulated total number of points delivered after each future sprint (the sum of the estimated velocity of that sprint and all previous sprints)

The scope line shows the estimated scope in points as it was known at the time of each sprint. The scope may change due to discovery of new work, and removal or acceptance of work based on the projected amount of work that can be done before the deadline. The scope line may also go up or down with constant scope if the estimates change.

If a project has two deadlines. E.g. Feature Code Freeze before a final platform QA stage and “all done” before delivery you may have two scope lines like in the graph below.

The source for the graph is the Projections Sheet. Most of the data on this sheet are links to data on the sprints sheet. The only data to update in this sheet are the scope in points when they change. Just update the numbers for the next sprint and you are done.

By updating the scope for the sprint after the latest information was found we get a sense of how the scope and estimate cost of the scope has changed over time.

Only update the Yellow cells.

The graph is based on a burn-up chart Khal Ray shared with me at SRS Health.

The opinions represented in this blog are my own, and not that of my employer or the  organizations that I work with.